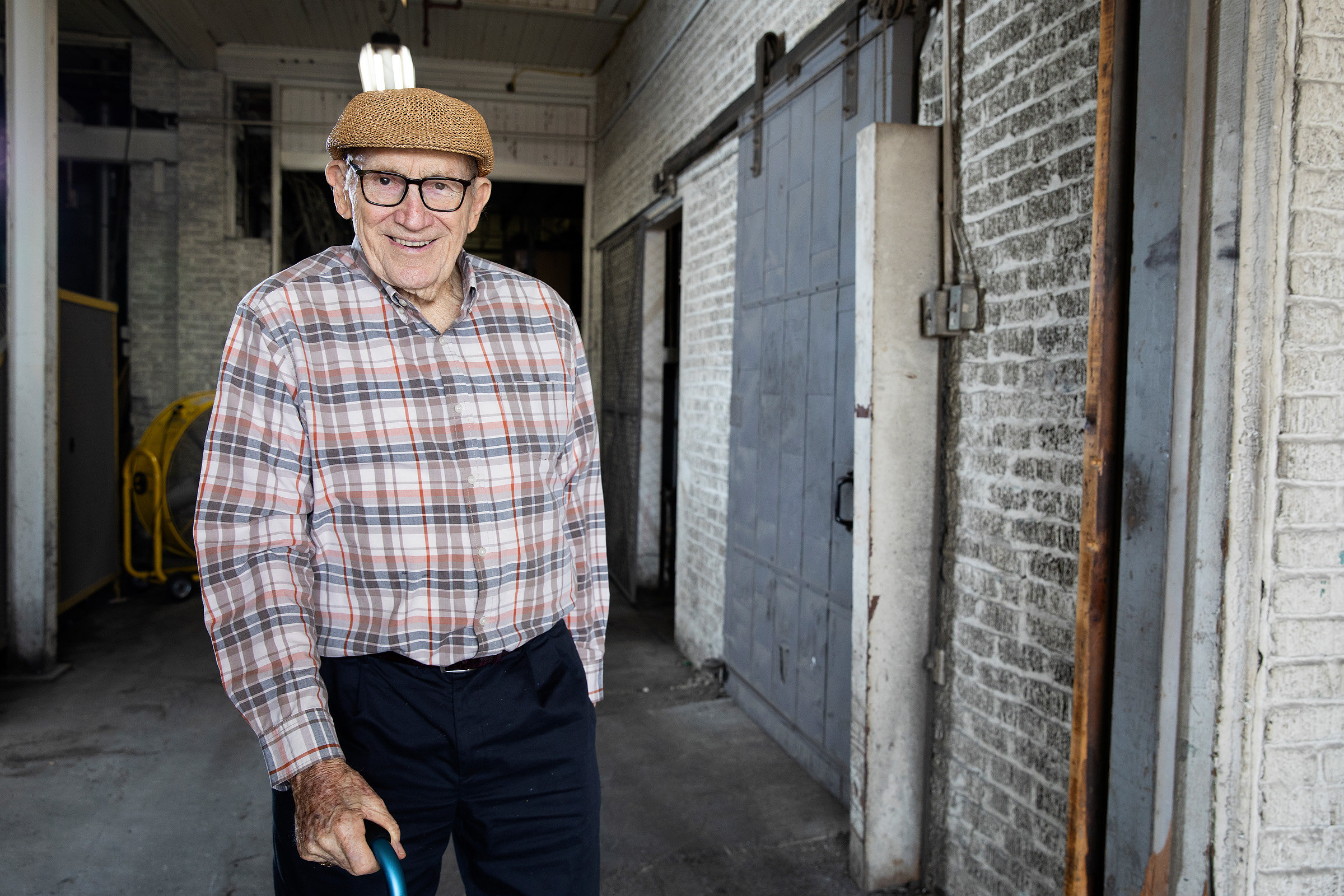 BY JOHN A. DARNELL JR.

He also operated Adamas Gem Shop at Market St. and McClurg Rd., and Diamond Steel for many years.

At YSU, he was a major contributor to Penguin sports programs and played a major role in philanthropic efforts to raise funds for the construction of Stambaugh Stadium. Mr. Smith served as the co-chair of the Stambaugh Stadium project and was instrumental in the brick campaign.

A frequent traveler, Mr. Smith, like his father, began acquiring geological specimens from all over the world. By 1962, he and his father had amassed enough pieces to open their own rock shop, Adamas Art and Hobby Shop, within a barn at his home in Boardman. 40 years later, he donated his extensive mineral collection to Youngstown State, where the Clarence R. Smith Mineral Museum was established.

During dedication ceremonies for the museum, Mr. Smith noted “The people of the Mahoning Valley need to do all that we can for our youth, striving to give them the greatest opportunities possible.”

By his deeds and actions, he did just that his entire life.

He capped the effort to erect a Veterans Memorial in Boardman Park with the donation of an Eagle sculpture that graces the memorial today.

Five years ago, Mr. Smith was asked if he wanted to buy an American Flag as part of a fund-raising effort to refurbish flags that fly along Market St. in Boardman, from Memorial Day to Labor Day. Without hesitation, he provided funding for all the American flags that line the roadway.

Clarence R. Smith was the first president of Boardman Little League in 1955, often-times showing-up to umpire games, first played at West Blvd. Elementary School and in Boardman Park. He helped merge Boardman Little League and Boardman Youth Baseball into one organization, Boardman Community Baseball, joining soon thereafter with Dr. John York to lead the development of the Fields of Dreams, one of the largest youth baseball complexes east of the Mississippi River.

A former member of Boardman United Methodist Church, Mr. Smith, worked with Rev. Norman Crewson to lead the effort there to build a new sanctuary for the church in 1966 at the corner of Market St. and Buena Vista.

When he and his wife relocated to Lake Tomahawk a decade ago, he joined Greenford Christian Church, promptly donating a 10-ton, 35-ft. steel cross to the church so families could gather at the site to pray and reflect. But Mr. Smith thought the cross needed proper landscaping, so he contacted David Collins at Diamond Steel. The company had to use a 150-ton crane to appropriately transport and place huge boulders at the site, much to the pleasure of Mr. Smith.

As a longtime member and former Chairman of the Boardman Local School Board, Mr. Smith helped to lead the effort to build a new Boardman High School on Glenwood Ave.

Some four decades later, in 1999, he and his company aided the Auditorium 2000 drive to build a 1,600-seat auditorium at Boardman High School, including the creation of the studio for the Boardman Schools Television Network (BSTN).

In partnership with his lifelong best friend, Joe Dickey, the pair quietly supported a variety of Masonic and community efforts, including establishment of the 32-degree Masonic Children’s Learning Center that was dedicated to understanding and helping children with dyslexia; as well as support for inner-city schools in Youngstown.

For Mr. Smith, life was about humility and family, with whom he always took special enjoyment in spending Sundays every summer with his great-grandchildren and family at Lake Tomahawk in Columbiana County.

He never sought credit or publicity, preferring to speak about Christianity and politics (what a mix), planting trees, and of course, family.

Sonny Smith was born July 10, 1928 in Boardman, the son of Clarence and Lottie Virginia Smith Sr.

He attended Valley Forge Military Academy, and then graduated from Boardman High School in 1947. He attended Kenyon College, but his time there was cut short when he returned to Boardman to operate Diamond Steel Construction due to illness in the family when he was a junior at the college.

A pipe hanger venture led to the formation of Compco Industries, which soon began manufacturing tank heads for pressure vessels, including air compressors, propane storage, water tanks, and many other applications. For many years the company was located at 85 East Hylda in Youngstown, before moving its headquarters to Columbiana, where it has acquired several, smaller steel fabricating firms.

Most important to Sonny was his faith in God and his love for family and country.  He often remarked that he considered his employees part of his family. He turned down numerous offers to sell the business as he wanted to take care of his Compco family.

He served on the board of the Home Savings and Loan Association, Mahoning National Bank and was a member of the Mahoning Valley Council of Churches and Organization of Protestant Men.

Mr. Smith was an honorary member of the Buckeye Elks Lodge No. 7, named Man of the Year by the Boardman Civic Association, and was a recipient of the Private Sector Business Award from the Better Business Bureau.

He was a recipient of Scouting’s highest honor, the Silver Award, in recognition to his support for the Whispering Pines District/Boy Scouts of America,

He was a former member of the Youngstown Club and Tippecanoe Country Club, and a current member of Salem Golf Club.

Active in the Masonic Fraternity, he was a member of Western Star Lodge #21 F.&A.M. of Ohio, a 33rd Degree Mason of the Ancient Accepted Scottish Rite, Valley of Youngstown, the York Rite Bodies of Youngstown, Al Koran Shrine in Cleveland, The Youngstown Shrine Club, Cleveland Court #14 Royal Order of Jesters, and Aut Mori Grotto.

In 2002, Mr. Smith was honored as the 2002 Penguin of the Year, as chosen by the Youngstown State University Penguin Club.

Sonny and his wife, Rose Marie (Poschner), celebrated their 70th wedding anniversary on Wed., June 17, 2020, with a family celebration at their home.

He is preceded in death by his parents, and his first son, Clarence ‘Smitty’ Smith III, and three sisters, Jackie Botch, Elsie McLane and Margaret Turnbull.

During his later years, Mr. Smith would often reminisce about Boardman Township and the many civic endeavors in which he loved to participate.

Recalling the building of the Fields or Dreams, he would sometimes say—“Since we built that place, just think about all the families that have come together, watching their kids. It’s not about the sports, it’s about all those families who get together. Isn’t that something!”

The family would like to thank Ed and Diane Reese and all the wonderful and compassionate staff at Briarfield Place at Ashley Circle for their care given to Mr. Smith; as well as the staff of Hospice of the Valley.